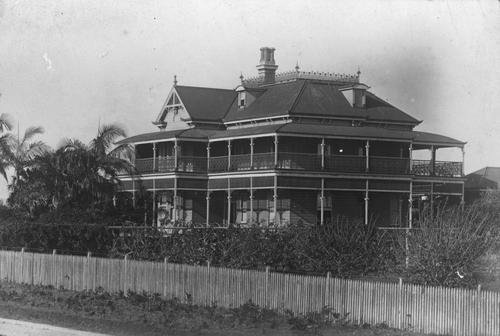 Gilbert Burnett had been employed as overseer at Louis Hope’s sugar plantation at Ormiston, and when Hope decided to get out of the industry, Burnett took up land at Trafalgar Vale, Wellington Point and purchased much of Hope’s sugar machinery. Burnett set up his own mill about 1⁄4 mile west of Hilliard’s Creek, and by mid-1883, Burnett’s cane fields at Trafalgar Vale were well established, and he had operating the sugar mill, a sawmill, and a bone- mill, the latter providing fertiliser for the cane. Burnett also was buying up local cane for crushing. The sawmill at Trafalgar Vale was established initially to cut timber for extensions to Burnett’s sugar mill, but local orders for milled hardwood had encouraged him to expand his sawmilling operations. By November 1884 he had ceased the cultivation and manufacture of sugar at Trafalgar Vale, and had established in its place what he claimed was the largest country sawmill in the colony. The Eucalypta, an 85ft long steamer, was built for Burnett to transport cypress pine from the Moreton Bay islands (Amity Point on Stradbroke, Coochiemudlo and Macleay islands) and hardwood from the Tweed Heads, Nerang, Coomera and Logan districts to his mill, the timber being unloaded at Hilliard’s Creek. In the mid-1880s, Burnett entered into partnership with a number of Brisbane businessmen to subdivide much of the former Trafalgar Vale plantation as the Wellington Point Estate. The estate sold reasonably well, as the railway was about to be extended to Wellington Point and on to Cleveland. Further subdivision and sales were made by the syndicate in the late 1880s, by which time the railway had arrived. In 1889, he replaced his earlier and more modest home with the large timber house now known as Whepstead, but initially called Fernbourne. Fernbourne was built during the wave of boom-time investment and speculation, which characterised the late 1880s, but in 1891, as the boom burst and the credit squeeze tightened, Burnett was declared insolvent. When the Burnett family left Fernbourne, they erected a smaller house on the eastern side of the railway line at Wellington Point, still on part of their original Trafalgar Vale estate and near the sawmill. This, their third home in the Wellington Point area, they also named Fernbourne, and it is likely that the first Fernbourne was re-named Whepstead at this time. After the Burnett family left the first Fernbourne (now Whepstead), there followed a succession of owners and lessees. In 1943 Matron Ethel Dolley purchased the house and converted it into the Bay View Private Hospital. The property remained a hospital until 1973, when it reverted to a private residence. A number of owners since have maintained Whepstead as a restaurant and function centre, and finally today, as a private residence once more.